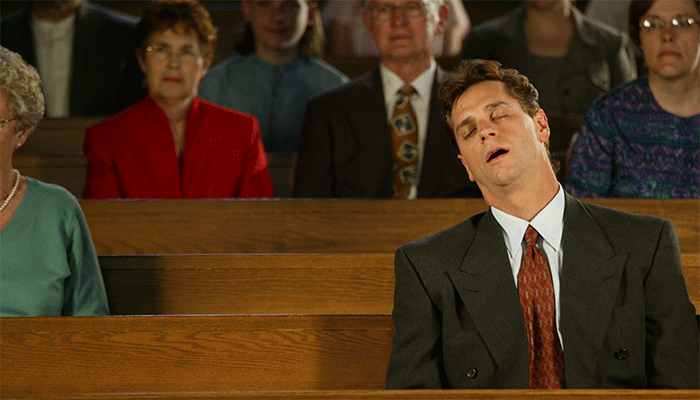 Let’s be honest—at some point in your church life you’ve nodded off during the sermon. I can remember vividly one time as a kid, I had stayed up late the night before and I was sitting in church struggling to stay awake. I could feel myself losing the battle, as my head was bobbing I would catch myself and awaken for a few seconds. I did this for several minutes, until I went down for the count. My head leaned forward and “thump!” My forehead nailed the pew in front of me. I jolted awake again and quickly looked around to see if anyone saw it – of course, my mom did who sitting beside me. I think she had hard time not laughing out loud.

It’s interesting as a preacher because I see the ugly (and sometimes hilarious) reality of sleeping saints from the pulpit. I have witnessed bobbing heads, closed eyes and open, yawning mouths, on occasion a snore or two. When I first started preaching, it bothered me, but then I realized that it also happened to one of the greatest preachers of all time and I felt some consolation.

In Acts 20 we have a passage that is certainly eye-opening. While preaching in the Greek city of Troas, Paul encountered a sleeping saint named Eutychus. The young man was precariously perched in a third-story window when his eyes slammed shut, and he fell to his death.

As I studied this story, I started thinking about how Eutychus is an object lesson about sleeping saints. The sad reality is that in a spiritual sense there is a Eutychus sitting in every church. The Eutychus Effect happens when someone is present physically, but spiritually they are asleep.

In fact, the Bible is full of sleeping saints who checked out for various reasons, and like Eutychus they had a great fall. Consider Jonah, God’s prodigal prophet who said, “No” when God said, “Go.” The Bible says that when Jonah got on the boat to flee to Tarshish that he went down into the cabin and fell asleep (Jonah 1:5). Meanwhile, God sent a terrible storm to get the attention of Jonah and awaken him! Jonah snored while the thunder roared! Reminds me of a Vance Havner quote, “Most Christians live so far below the standard, you would have to backslide to be in fellowship with them.” It’s a dangerous place when the child of God is so backslid they can’t hear the voice of God.

Samson also fell asleep while resting his head in the lap of Delilah. While He-man slept, Delilah betrayed him and cut his hair, which was the sign of his commitment to God. When Samson awoke the Bible says He did not know that his hair had been cut and that the presence of the Lord had left him (Judges 16). Sin and compromise with the world gradually desensitizes us to the presence of God. The danger of drifting away from God is that you’re miles away before you realize it.

Then there is Peter who fell asleep in Gethsemane, when he should have been praying (Mark 14). Soon after this scene, we know Peter denied Christ three times. Yet, Jesus warned Peter that Satan was after him to “sift him as wheat” (Luke 22:31). Peter’s biggest failure can untimely be traced back to his lack of prayer. A prayer-less Christian is a powerless Christian.

That brings me back to Eutychus. Look at his position in the text—sitting in a window (20:7-9). In other words, his body was half in the church and half out the church. He was in a compromising place, and when he fell sleep he had a great fall. There are many Christians in this dangerous position—they are trying to keep one foot in the church and one in the world. Of course, James warns adamantly against this lifestyle, “Friendship with the world is enmity with God” (4:3).

One question we need to ask ourselves from this text is this, “Am I sitting in the window?” Are you in a compromising position with the world, while the Devil has lulled you into a slumber?

There are few things more miserable than trying to fight off sleep. Likewise, no one is more miserable than the casual Christian. Adrian Rogers said it best, “The backslider has just enough Christianity to be miserable in a nightclub, and not enough to be happy in a prayer meeting.” If you are “sitting in the widow” you will never have contentment and peace in your spiritual life.

Paul’s resurrection of this young man is a picture not only of salvation, but of God’s grace to slumbering saints. If you are spiritually dead today, God can give you new life in Christ (2 Cor. 5:17). If you have become a slumbering saint and experienced a great fall, God wants to restore you and offer you second-chance. As Paul says in Eph. 5:14, “Awake, O sleeper, and arise from the dead, and Christ will shine on you.”

Here’s the good news—Eutychus fell asleep and died, but Paul restored him. Jonah fell asleep, but God got him back on track by way of a great fish and the Word of the Lord came to him a second time. Samson fell asleep and he lost his hair and God’s anointing. But, on the last day his life God gave him another chance, and at his death he killed more of the enemy than he did during his entire life. Peter fell asleep and denied Christ. But God wasn’t done with Him either.

And friend, there’s grace for you too! God’s alarm clock is going off—don’t hit the snooze! -DM
Posted by Derrick McCarson at 1:43 PM