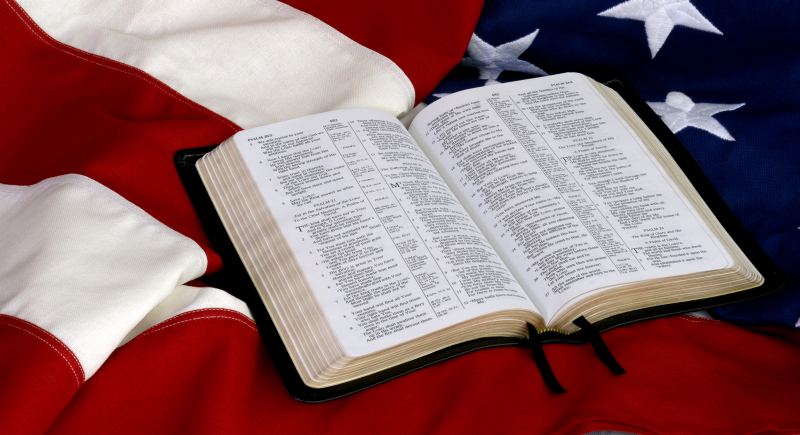 If you had to decide which document had the most significant impact on the founding of the United States which one would you select and why? Maybe, you’d say it was Jefferson’s immortal words penned in The Declaration of Independence? Perhaps, you’d point to the genius of Madison and how he framed The Constitution? Or what about Thomas Paine’s fiery pamphlet Common Sense? No doubt each of those were vital to America’s beginning, but I would submit to you that each of them take a backseat to the impact of the Bible.

Despite what the liberals, atheists and secularists would deceive you into believing, America’s foundation is deeply rooted in the Bible. Consider just a few facts:

·         The Mayflower Compact was written in 1620 by the first settlers of Plymouth as they sat in the captain’s quarters of their ship before setting foot on American soil. The famous document, also known as the “birth certificate of America,” affirmed that they set out in this great undertaking, “for the glory of God and the advance of the Christian faith.” Their story is well chronicled in one of the first books written in the New World, Of Plymouth Plantation by Governor William Bradford. It was he, through citing the Bible, who named them “pilgrims.” Bradford quoted from 1 Peter 2:11, which says, “Beloved, I beg you as sojourners and pilgrims abstain from fleshy lusts which war against the soul.”[1]

·         George Washington set the tone as our first president by declaring, “It is impossible to rightly govern the world without God and the Bible.”[2] When Washington was inaugurated as president in 1789 in NYC, he got down on his hands and knees and kissed the Bible. Then he led the Senate and the House of Representatives to an Episcopal church for a two hour prayer service. That’s enough to send the ACLU into apoplexy![3]

·         John Jay was one of the authors of the Federalist Papers and became America's first Supreme Court Justice. He also served as the president of the American Bible Society. Dr. Benjamin Rush, who signed the Declaration of Independence and who attended the Constitutional Convention, was a founding member of the Philadelphia Bible Society.[4] John Witherspoon, also a signer of the declaration of Independence, was the president of Princeton University and an ordained Presbyterian clergyman.[5]

·         Two professors from the University of Houston, Donald Lutz and Charles Hyneman, wanted to discover whom our Founding Fathers quoted most often. After ten years of studying more than 15,000 documents, they found that more than a third of all the Founding Father’s quotes ad citations in speeches and correspondence came directly from the Bible.[6]

·         During the first 160 years of our nation’s history, public-school students were encouraged to learn the moral precepts found in the Bible. For example, in 1782 the US congress said, “The Congress of the United States approves and recommends to the people the Holy Bible for use in schools.”[7]

Ken Woodward, writing in Newsweek magazine in an article entitled, “How the Bible Made America,” said, “Historians are discovering that the Bible, perhaps even more than the Constitution, is our founding document.”[8] -DM

The Red Book or the Good Book

“Recite the words, ‘Mao is our Savior’ and give up your Bible for the Red book and you can be free.” This was the Communist brainwashing that Pastor George Chen heard from his jailers. The ultimatum was simple—deny Jesus, stop preaching the Gospel and he could be released. But George Chen would not be so easily broken. His amazing testimony of faith is recorded in Philip Yancey’s book, Prayer. Chen was one of the original leaders of the underground church movement in China. He pastored three rural churches totaling about three hundred members. He was arrested three times for the so-called crime of “preaching the Gospel” and in 1968 the Communist regime locked him up and threw away the key.

Chen was ripped away from his wife and son, who actually died while he languished in prison. The cruel Communist captors withheld this news from him. As part of his punishment, the warden forced him to work in the prison cesspool, where he spent his days knee-deep in human waste, turning it with a shovel to make compost. “They thought I’d be miserable, but actually I was happy,” said Chen. “It smelled so bad no one could come near me, so I could pray and sing aloud all day without interruption.”

Not to mention that after several years of this, the warden told Chen he would grant him freedom if he would renounce Christ and promise never to preach again. Chen refused. Finally, in 1978 after 18 long years of prison, Chen was released from the Chinese prison camp.[1] It wasn’t until he was given his freedom that he discovered his family had died and the churches he planted had grown from the original 300 members to 5,000.

Pastor George Chen fits the description given in the grand “Hall of Faith” passage. Towards the end of Hebrews 11, the writer explains the adversity that many who walked by faith endured:

“36 Others suffered mocking and flogging, and even chains and imprisonment. 37 They were stoned, they were sawn in two, they were killed with the sword. They went about in skins of sheep and goats, destitute, afflicted, mistreated— 38 of whom the world was not worthy—wandering about in deserts and mountains, and in dens and caves of the earth.” (Heb. 11:36-38).

Pastor Chen and the untold numbers in the body of Christ around the world who are suffering for their faith are a stirring challenge to us. We in the West are something of a historical anomaly. For the past 240-plus years, Christians in the U.S. have been insulated from much of the persecution that believers in Asia, Africa and the Middle East endure on a daily basis. However, we can see that this trend is reversing is the States. Persecution is not just over there–it’s also here, but in milder forms.

In fact, consider the following statistics from Open Doors:

I’m not trying to put a guilt trip on anyone for not being more “hard-core” about their faith or that we should pray for persecution to come our way so that we can prove our commitment. However, we should recognize the simple fact that if we walk in-step with Christ then we will be walking out-of-step with the world. We cannot expect that God will give us a free pass when it comes to suffering, nor should we strive to have the world’s stamp of approval. Every disciple of Christ will have to stand at the crossroads of convictions and convenience and make a choice.

Perhaps Vance Havner said it best, “The modern church member all too often avoids persecution by taking the line of least resistance and living in a truce with this age of easy-believeism. The early Christians wore scars, but we would rather wear medals.”[2] Christ has not called us to wear a crown, but to bear a cross (Luke 9:23) and if Jesus was hated then we will be too (John 15:18-19).

Persecution should not be a surprise to those who love the Lord (1 Peter 4:12). Ungodliness is threatened by godliness. When we take a stand, we will be stood against. Let’s pray that from the fires of persecution God’s people become stronger and the church grows cleaner. -DM

That’s my dad with the sturdy frame and the tender heart
The man who helped get me off to a good start
He doesn’t wear a cape, but to me he’s a hero
Because he taught me how to fish, and build and grow

That’s my dad with the calloused hands and the old work truck
The man who toiled all day just to earn a buck
He was never rich or famous, but he’s someone to look up to
Because he led me like real men are supposed to do

That’s my dad with the belt that was ten feet long
The man who showed me right from wrong
He was not perfect, but I know long after he’s dead
I’ll remember how his life looked like Jesus’ words in red

That’s my dad with mama after all these years
The man who loved her through sickness and tears
He showed us kids how to love and how to pray
And because of him, I am the man I am today

-DM
Posted by Derrick McCarson at 10:30 AM No comments:

There is an old story about a man on passenger ship who was lying in his bunk during a storm, deathly seasick. Suddenly he heard the cry of “Man overboard.” The seasick man prayed, “God help the poor fellow—there is nothing I can do.” Then the thought came to his mind, “At least I could put this lantern in the porthole,” which he did. Amazingly, the drowning man was rescued, and recounting the story next day he said, “I was going down in the darkness for the last time when someone put a light in a porthole. It shone on my hand, and it gave me just enough light to grab the life preserver that was thrown out for me.”

Have you ever sounded like the seasick man in that story? “God can’t possibly use me I’m too weak.” “I have a checkered past and no one will take me seriously.” “Sorry, that’s just not my spiritual gift.” “Why would God use me, when there are all these other better qualified pros?”

That kind of thinking is very similar to the excuses Moses made while beating around the burning bush. But Moses said to God, “Who am I that I should go to Pharaoh and bring the children of Israel out of Egypt?” (Ex. 3:11). Translation—“God you don’t want me for this job of delivering your people. I’m damaged goods. I already tried this once and it didn’t end well!”

Moses’ had another excuse, “But Moses said to the Lord, “Oh, my Lord, I am not eloquent, either in the past or since you have spoken to your servant, but I am slow of speech and of tongue” (Ex. 4:10). In other words, he said, “God you don’t want me I’ve got a stut…stut...stuttering prob…prob…a speech impediment.” Apparently, Porky Pig was more eloquent than Moses.

Moses used every excuse in the book to get God off his back—the excuse of identity, ignorance, inadequacy. In the end, we know that Moses finally got on board with God’s program once the Lord shot down all his cardboard excuses.  Someone has said, “An excuse is nothing more than the skin of a reason stuffed with a lie.” We love to use excuses when God is calling us because somehow we think it gets us off the hook. But have you ever thought about what you are really telling God when you use a flimsy excuse? Essentially, you are telling Him, “I’m not available.”

I wonder how many people are living miserable lives right now because they refuse to do what God has told them to do. Instead of obeying God they try to come up with reasons why they shouldn't have to obey. Instead of trusting God's promise they trust their fears. What is God calling you to do today? What excuses have you offered Him? Bear in mind that the only requirement God has of us is availability. Any old bush will do, if you are available to God.

The truth is God didn’t need Moses’ help to free His people, any more than He needs any one of us to fulfill the Great Commission. Yet, mysteriously the Sovereign God chooses to use broken, weak people to accomplish His purposes on earth. The Lord picks the weak and the washed-up failures because when He does His work there’s no confusion where to give glory. It's time to stop saying, “I can't” and start saying, “He can.”  -DM
Posted by Derrick McCarson at 3:46 PM No comments: