The Days of Lot 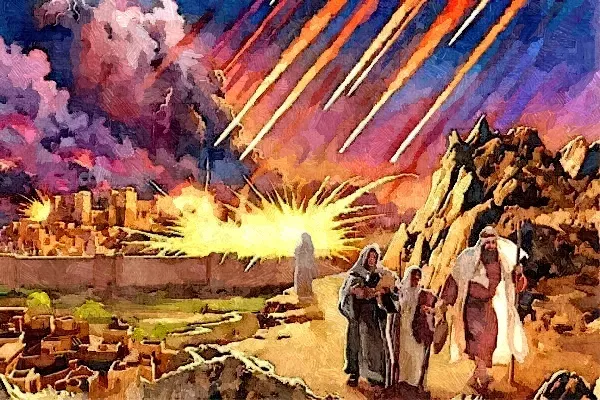 28 Likewise, just as it was in the days of Lot—they were eating and drinking, buying and selling, planting and building, 29 but on the day when Lot went out from Sodom, fire and sulfur rained from heaven and destroyed them all— 30 so will it be on the day when the Son of Man is revealed.

The Old Testament city of Sodom is synonymous with sin and judgment. While ancient Sodom may be a charred ruin near the Dead Sea, the spirit of Sodom is definitely alive and well today. As America continues to rot morally and spiritually, it’s clear that we are a nation that is slouching towards Sodom more and more every day.

During the 2020 election campaign, Joe Biden told a questioning voter that 8-year-olds should not face discrimination if the child decided to change gender.[1] I have an 8-year-old at home who can’t even decide his bedtime, much less his gender.

On January 4, 2021 Democratic Rep. Emanuel Cleaver from Missouri delivered the opening prayer for Congress opting for an “inclusive / gender neutral” conclusion, “We ask it in the name of the monotheistic God, Brahma, and (the) God known by many names, many different faiths. Amen, and Awomen.”[2] What? “Awomen,” that’s not even a thing… But neither logic nor biology need not apply anymore.

As Biden took the White House, he wasted no time making waves appointing the first transgender health secretary, “Rachel” Richard Levin. This is also ironic because medical data reveals that transgenderism is the very epitome of unhealthy! In fact, transgenders have the highest suicide rate of any US group; 41% attempt suicide.[3]

Some states (like Oregon) have already passed laws giving transgenders the freedom to enter a public bathroom of their preference, allow minors to get a state-subsidized sex reassignment surgery without parental consent and recognition of bizarre marriages like the “throuple” - a marriage of three people.[4]

In Luke 17, Jesus mentioned Sodom in relationship to His promised return, citing that the world’s spiritual and cultural condition would be reminiscent of Sodom just prior to earth’s last days. The West is defiantly moving that way warp speed. As we think about “the days of Lot” let’s take note of these five attributes.

Sexual deviancy – One verse in the little book of Jude sums up Sodom’s sordid story: “7 just as Sodom and Gomorrah and the surrounding cities, which likewise indulged in sexual immorality and pursued unnatural desire, serve as an example by undergoing a punishment of eternal fire.” Billy Graham once said, “If God didn’t judge America for her sin, then He would have to apologize to Sodom.” Of course, he said that in the 1960s, how much more does that statement apply to our evil situation now?

Selfish disposition - The prophet Ezekiel spoke of Sodom’s pride and smug prosperity, “49 Behold, this was the guilt of your sister Sodom: she and her daughters had pride, excess of food, and prosperous ease, but did not aid the poor and needy. 50 They were haughty and did an abomination before me. So I removed them when I saw it” (Ez. 16:49-50). The sin that used to slink down the back alley now parades down main street. We have rejected God’s authority and God’s design, and most have a cavalier attitude about it. We no longer value life because we hate the author of life, so kill a baby, but protect the speckled dace minnow.

Skeptical disinterest - Did you know that people who study religious trends have invented a new category called “the nones”? There are more than 72 million Millennials in the US – almost 25% of the population. In 2008, researchers noted that 31% of Millennials described themselves as “religiously un-affiliated” or “nones” when it came to God. By 2018, that number had jumped to 42%.[5] Jesus said it was a “business-as-usual” mentality right up to the hour that God sent angels into the city to get Lot and family out. We ought to expect many to remain skeptical and hard-hearted to the Gospel even as we try to warn them of Christ’s return and impending judgment, but some will believe!

Supernatural deliverance - Lot was removed from Sodom before the fire and brimstone rained down. 2 Peter 2:6-9 says that God’s saving of Lot from Sodom proves that knows how to rescue His people. This is a picture of what is going to happen at the Rapture. Just as Lot was taken from Sodom before God’s wrath engulfed the wicked, the church will be removed before the Tribulation as she is not destined for wrath (1 Thess. 1:10, 5:9).

Sudden destruction - Like Chernobyl or Hiroshima, Sodom was flourishing one day and then a smoldering ash heap the next. Lot may have been saved, but he was singed. He was what you might call a “carnal Christian.” He lost his wife and sons-in-law, his riches and his standing when Sodom when up in flames. What a warning not to love the world which is destined for destruction, and to take serious leading our family in Christ so that when the day of judgment begins they aren’t left behind!

Posted by Derrick McCarson at 3:36 PM No comments:

Truth to the Nations